That’s where the Guardian Angel (GA) program steps in. GA was formed by volunteers and supporters in 2012 to secure the funds for non-routine, costly medical treatments for HART’s felines. The GA program saves lives, ensures that cats and kittens are healthy and pain free, and improves their chances of finding good homes. As a restricted fund, GA proceeds are designated exclusively for special medical expenses.

HART is a no-kill shelter committed to rescuing and caring for homeless animals in need. We will never turn away an animal because of sickness or age. Your support, no matter how small, has a significant impact. GA funds save lives - together, we can make a difference!

Click on the DONATE button below to make a credit card donation to HART’s Guardian Angel Fund. The donation will be processed by PayPal Giving which transfers monies to HART free of service charges. If you prefer to make a direct credit card payment, click HERE.
HART is an IRS-registered 501(c)(3) non-profit organization and donations are eligible to be tax deductible
DONATE

One of the cats who was helped by your GA contributions
is Peety.

Peety came to HART with serious fur matts and obvious problems with his eyes. The mats were removed, and his eyes appeared to be bulging, so he was taken to the vet for an examination. The bulging eyes would be consistent with Glaucoma, but his initial eye pressure was within normal levels. The exam determined that Peety had an inflammation of the inner eye of both eyes, and treatment began. At the same time, HART was referred to a veterinary ophthalmologist in Arroyo Grande, who determined Peety did indeed have Glaucoma, which had been masked by the inflammation.

Peety was found to have no vision in his left eye, and only a perception of light in the right eye. The Glaucoma was advanced and very painful for Peety, so the decision was made to remove both eyes. The surgery was successful, and Peety went back to his foster home to recover. At first, he was confined to a single bedroom, where he quickly learned how to navigate to his litter box, his food bowl, and the waiting laps of his foster parents! Before long, Peety was successfully exploring the entire home, and interacting with the resident cats—including a fellow blind kitty, who became his breakfast buddy!

Peety now has a forever home, as he was adopted by his foster family and now lives happily and pain-free. It was a life-changing journey for Peety, one that ended the pain he’d endured, and allows him to now live the rest of his days in comfort and safety. It also means that we need to work hard to replenish the Guardian Angel Fund, so we can help more cats in the future.

Even though his illness made him itchy and very uncomfortable, Mr. Kitters was a trooper throughout treatment. With the right medication and a special diet, Mr. Kitters is now in a permanent and loving forever home. This was made possible because of the help provided by GA.
Midnight sends his thanks to all of you who have supported the HART Guardian Angel Program.  The Guardian Angel fund paid for his life-saving surgery that corrected a urinary blockage.

When the HART Guardian Angel (GA) Program learned about Midnight, he had been relinquished to a veterinarian who had been directed to euthanize him, because his family was unable to pay for his surgery.  Your donations to GA saved this very sweet and calm 5 year old boy!  Thank YOU!

Please download and fill in the Guardian Angel Membership form below. You may also email it to warmhearts@slohart.org or mail it to 2638 Main St., Cambria, Ca 93428.

To help with a one-time donation, please click the donate button. You can contribute by phone, by mail, or in person. When you donate, please specify that your donation goes to Guardian Angel Fund—checks may be made payable to “HART Guardian Angel Fund.” At the HART office, we are always happy to answer your questions about the GA program, please call 805-927-7377 with any questions.
DONATE 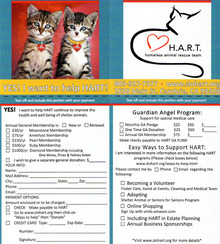 For the pet lover in your life, Guardian Angel Certificates are available to give as gifts. Extend a thank-you, or acknowledge a birthday, holiday, or special event with a GA certificate. Many supporters use these certificates to convey their condolences regarding the loss of a loved one or a beloved pet. For twenty dollars or more you can purchase a certificate at HART’s Gift Shop for Cat Lovers—or call the shelter to order one.


OUR MISSION
H.A.R.T. is a volunteer service organization and no-kill shelter with a threefold mission: Rescuing and caring for kittens and cats in need; Placing cats and kittens in caring, permanent homes; and Reducing feline overpopulation with an active spay/neuter program for H.A.R.T.’s felines and a trap-neuter-return-manage (TNRM) program for feral cats.

PHILOSOPHY
We are committed to ensuring quality of life to all living creatures, both feral and domestic.

HISTORY
Founded in 1983, H.AR.T. began with a small core of volunteers who fostered animals in their own homes. In 2000, the group rented a former veterinarian’s office and consolidated its rescue operations, allowing the organization to expand its services to the greater Cambria community. H.A.R.T. purchased the current shelter, located at 2638 Main Street, in 2012.

We currently only shelter felines because our neighbors are an apartment complex and a motel. However, we have association with every rescue organization in the region covering any type of animal, domestic or feral.